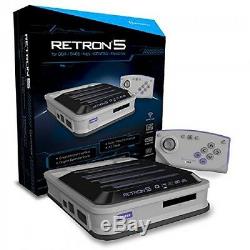 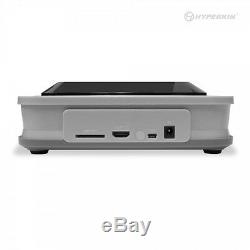 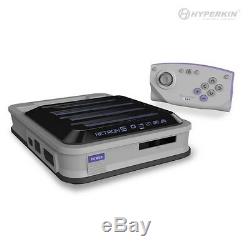 Multiple System Compatibility: The RetroN 5 allows you to play your favorite NES, SNES, Super Famicom, Genesis, Mega Drive, Famicom, Game Boy, Game Boy Color, and GBA cartridges on one system. You can also play Master System games with the use of the Power Base Converter. Graphical User Interface (GUI): A brand new GUI Menu that gives access to features and the ability to customize your entire gaming experience on the screen. HD Output: The HD output will upconvert the signal to your HDTV with a maximum output resolution of 720p. Save/Load States: Save or load your games at any point during gameplay, with 10 save slots for each game.

Video Enhancement: Customize your video settings with the variety of different filter and shader effects, including scanlines. Audio Enhancement: Utilizing Audio Interpolation, the RetroN 5 will produce a smoother, crisper sound output. Cheats: Pre-built cheats that can be accessed at any point during gameplay for most games. Bluetooth Wireless Controller: Utilizing Bluetooth technology, this controller has a range of up to 30 feet and features a microswitch directional pad, two programmable macro buttons, and a Home button for quick-in game access to features.

Original Controller Ports: 2 original controller ports (6 total) for each platform. 100% Compatibility: The RetroN 5 will play both PAL and NTSC cartridges.

CIC lockout chips and FX chips are no longer going to be an issue, as we aim to achieve 100% compatibility with all cartridges. We carry many brand names such as HP, Apple, iPhone, Canon, Braun, Philips, iPads, Nintendo, Samsung, Cisco, Kodak, Pandigital, Microsoft, Motorola, Samsung Galaxy, Android, Dell and tons more! Prop 65 Warning WARNING: This product can expose you to chemicals including Styrene, which is known to the State of California to cause cancer, birth defects, and reproductive harm.

We accept no responsibility for loss or damage items in return transit. Any item that is not in its original condition, is damaged, or is missing parts for reasons not due to our error: up to 50% of item's price. Apple - AirPods Pro - White Brand New. Hori Switch Mini Fighting Arcade Stick for Nintendo Switch Game Console NSW-149U. Xbox One S 1tb Console - Minecraft Complete Adventure Bundle NEW.